All your questions about taekwondo, it’s history, our club and membership fees are answered below.

If you still can’t find an answer to your question, then drop us a line using the contact form below and we’ll do our best to help you.

Taekwondo (TKD) is a Korean martial art. It has its roots in the ancient fighting practices of the Koreans but was formalised as a sport and martial discipline a little over 50 years ago. TKD is renowned for its dynamic kicking styles and the high level of fitness it entails.

Murals in the ruins of royal Korean tombs some 2000 years old show men practising a form of unarmed combat. The martial arts tradition persisted over the centuries in Korea, enjoying a glory day 800 years ago when a self-defence art called su-bak emerged with a strong following. Evidence even suggests it was practised as a sport in the truest sense, to entertain spectators.

Although the sport declined, the arts survived and, when Korea was liberated after World War II, national interest in martial arts surged again. A move in the 1950s to unify the various forms and create one sport led to Taekwondo, translating : Tae – ‘attacking’ with feet, Kwon – ‘attacking’ with hands, and Do – ‘way’ or ‘art’.

The meaning for ‘Do’ however is far more complex than just ‘way’. A more accurate translation is ‘way of life’. Taekwondo is not just a physical regime of kicking and punching; it is a discipline of mind and body. One of the first things many people say they have gained from Taekwondo is increased self-confidence and self-discipline.

By the 1960s, interest was spreading overseas; however it was not until 1973 that the sport staged its first world championships. The first Olympic exposure came in 1988, at Seoul, as a demonstration sport. Taekwondo remained a demonstration sport in 1992 at Barcelona, until finally in the Sydney 2000 games it become a full Olympic sport.

More than 50 million followers in about 200 countries around the world now practise taekwondo, and other countries have begun to challenge the original dominance of Korea in international competition. Still, one look at – and listen to – the sport shows the unmistakable imprint of its Korean heritage.

After calling them to attention, the referee’s opening command to the contestants is kyeong-rye . This instructs them to bow to each other. From there, the commands range from joon-bi (prepare to start) and shi-jak (start) to deuk-jeom (a point) and kyong-go (a warning). 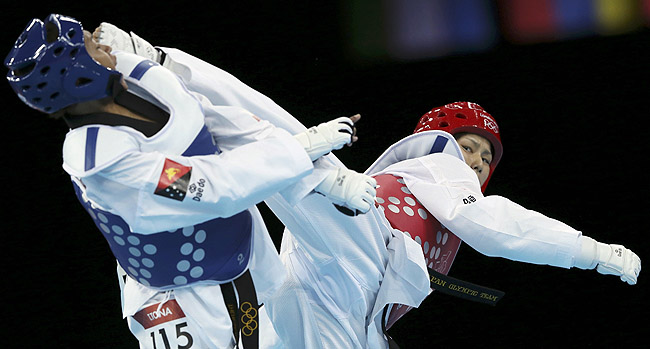 The contestants are referred to as “chung” and “hong”; the person in blue and the person in red. Each wears a dobok, the uniform, and tries to be the one standing in good health when the referee counts out yeo-dul or yeol .

Yeo-dul is “eight,” the end of a mandatory eight-count after a knockdown . Yeol is “10,” when a knockdown becomes a knockout and there is no resumption

Taekwondo is not simply about being taught how to fight. It can be beneficial in many ways that are not immediately obvious. Primarily, your fitness, strength and suppleness can all be improved through regular training.

The following health benefits of taekwondo are listed by British Taekwondo:

Other reasons for doing taekwondo can be supplied by current club members. Most talk of an increased confidence level. The knowledge of self-defence imparted also helps many feel less anxious walking about town. A last important feature is that, during exam term, many students find taekwondo is a great thing to do to relieve stress.

If you’ve always wanted to take up a martial art then taekwondo is for you. Come along and try it out. Your first class is free, so there’s no excuse.

How Does Taekwondo Compare to Other Martial Arts?

There is a bewildering variety of different styles of martial art now being taught. Each emphasises different techniques, approaches and even philosophies. As a result, it’s not possible to say which ones are ‘better’ than others; rather, you should choose your martial art based on what you want to gain. For example, tai chi is heavily concerned with formalised sequences of movements and meditation, so it’s probably not ideal if you want to learn self-defence. Below is some information about what taekwondo does and doesn’t involve; however, if you’re at all interested the best thing to do is to come along to a demonstration or a class and try it for yourself!

Taekwondo places a great deal of emphasis on powerful kicking and punching techniques. These are coupled with blocking techniques and stances. Essentially, it is a powerful martial art based on dynamic movements. This can be contrasted with styles such as wing chun which focus on conserving energy and minimising effort. As a result it’s a very exciting style to learn and is one of the best martial arts if you want to improve your physical fitness.

Martial arts differ in their level of formality. At the ‘informal’ end of the spectrum are styles such as kickboxing, which are explicitly designed to be used in real fights and sparring, and little else. At the other end are styles such as kung fu which are much more stylised and ‘artistic’: these also become useful in real fights, but only when one reaches a high level of expertise. Taekwondo encompasses both aspects. The techniques taught can be used for sparring and in self-defence, and this is a major component of our classes; however, there is also a more formal artistic element, particularly in the patterns. You can to some extent pick and choose between the two aspects (for instance, some of our classes are devoted to sparring), though you have to master both to grade.

Many martial arts, such as Judo, focus on holds, locks and throws. Taekwondo does not place great emphasis on these. However, a vital part of learning taekwondo is self-defence training, which includes a solid grounding in these techniques. Competition taekwondo does not permit throwing.

Taekwondo is an unarmed martial art. We teach students that their own bodies can display amazing strength and speed, up to and including putting one’s hand through four concrete blocks. However, our self-defence training includes techniques expressly designed for dealing with attackers armed with weapons such as knives or bottles.

Lastly, many people are attracted to martial arts after seeing people in sunglasses doing triple jumping spinning kicks while plummeting from tall buildings, and the like. If you want to be able to do this sort of thing (apart from the falling off buildings, which any twerp can do), taekwondo is ideal. Many of our techniques are inherently impressive, and ‘flashy’ (though also useful) moves such as spinning and jumping kicks are integral.


What Style of Taekwondo Do You Practice

CUTKD practices Olympic-style World Taekwondo / Kukkiwon taekwondo and is affiliated to the British Taekwondo Control Board. ITF students are very welcome too.

While the club is primarily a university club, it is open to anyone over the age of 16. Most members do have some connection to the university, either as a current or former student or staff, but no connection is required. As for fitness, you don’t have to be super-fit to do taekwondo (one of its benefits is that it will almost undoubtedly improve your fitness and flexibility). Come along to the next class and try taekwondo with us, for free.

What Do I Bring to the Class?

Nothing, at first, except a bottle of water and loose fitting sports clothing. Training is performed barefoot, so you will not need any specialist footwear, but we do allow specialised martial arts shoes.

Once you achieve your yellow belt (8th kup) the amount of sparring in core classes increases, so we recommend everyone above yellow belt to have their own shin and groin guards, and gum shield.

If you wish to grade or take part in a competition, you will need a dobok (the white uniforms you see us wearing). These cost about £15 – £50 depending on the type and size you buy, and are a good investment. (Note for budding ninjas: students are required to wear white doboks – please bear this in mind if you choose to order yours independently.)

Sparring training also requires that you wear a hogu (chest protector), head guard, gloves, foot protectors. The club has a supply of these that we lend to beginners, however if you are serious about sparring, we strongly suggest you buy your own – they will almost certainly fit you better and be cleaner than the club’s supply. You will also need your own mouth guard.

Can I order equipment through the club?

Yes. Sometimes CUTKD makes bulk orders for club equipment, and when we do so, students may wish to order additional items for themselves. There are two main reasons to do so: we’re slightly cheaper, since we can obtain items in bulk, and with us you’re guaranteed to get equipment that comes up to World Taekwondo standards.

Our competitions are mostly organised through a body called World Taekwondo (WT). WT lays down the law about what equipment is required for competition. If you turn up for a WT sanctioned competition with incorrect equipment, you won’t be allowed to compete. All the equipment on this page is WT-approved, unless otherwise stated.

However, you are more likely to find that you need equipment at a time in the year which does not coincide with a CUTKD order. If this is the case, it is usually easier and quicker (since there are no middle-men) to order kit for yourself. Recommended online-retailers for martial arts are Playwell, Samdo (for Adidas kit) and luvtkd. If you need any guidance on kit which is appropriate for WT, speak to any of the committee members at training.

How Much Does It Cost?

After your first free lesson, the fixed costs are £30 per year; this covers your club membership, regular newsletters full of hints, tips and social events, club discounts and insurance (a legal requirement) and you’ll even get another complimentary class as a welcome gift in your first year with us.

Training sessions are then paid for per lesson, or per term:

These costs will be adjusted based on the number of weeks left in the term should you join late. We accept cash, cheques (made payable to ‘CUTKD’). You can also pay online, via PayPal to this address:
cutkd-chief-instructor@srcf.net

Out of term training costs £5 per taekwondo lesson, payable at the class.

Make sure you register with British Taekwondo when becoming a member of CUTKD. Fill in the sign up form, then click ‘new application’ on your profile page.

You will need to purchase a dobok (uniform), from around £20+ , in time for your first grading. For competition, we recommend you buy your own pads.

**To grade and work your way to a black belt, you will need to train a minimum of 2 times per week. You may upgrade to a pay-per-term option at any time.

Do I need insurance?

What’s this insurance actually for?

It provides limited cover for pain, suffering, and loss of amenity incurred when taking part in training or competing in events in connection with the activities of the club.

‘Temporary total disablement’ means you are unable to carry out any of the normal duties relating to your occupation. To qualify, you must have been absent from employment/ studies for a period of more than two weeks; proof of absence needs to be supported by medical certificates. Proof of loss of earnings/benefits may also be required. It is a condition of this policy that licenced members shall be domiciled in Great Britain and/or Northern Ireland. If any of this is confusing, email the membership secretary and he will attempt to clarify it.

Not usually, no. Although we cannot give a definitive comment, your organisation is unlikely to sanction any martial art events outside its control (see by way of example BTCB limitation described above) and you would therefore be unlikely to be insured by either us or them while training. The only exception would be if you have pre-existing BTCB insurance, which I would need to see.